A World Without MSPs 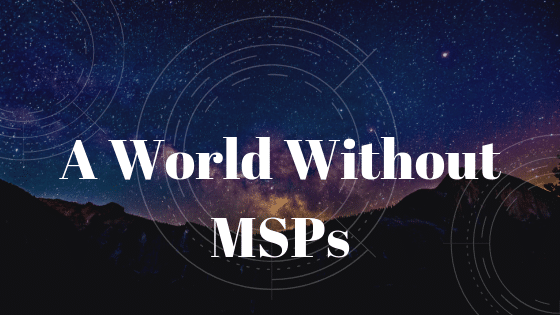 Pricing is the external reflection of what your services are worth. Managed service providers have long struggled with pricing. In my opinion, this struggle is due to the inherent lack of certainty about how customers perceive managed services. MSPs should have a lot more faith in their value to customers, mostly because a world without MSPs would look a lot different than the one we have today.

Put bluntly, in a world without MSPs basic stuff just wouldn’t get done. I’m talking about the patching, monitoring, rebooting, adding users, removing users, configuration changes, performing backups, validating backups, restoring backups, and the many other important and easy to overlook tasks that accompany IT ownership.

What MSPs do is mainly unseen because it can be unglamorous. But these tasks are vital to maintaining IT assets, and internal IT departments would be buried in maintenance that would ultimately not get done.

It is sometimes difficult to hold internal IT departments accountable, especially when they are a) understaffed, b) poorly trained, or c) don’t have the proper tools to perform their jobs. There are well staffed, trained, and provisioned IT departments, especially at the enterprise level, but the rest of the world has to make do with what they have.

A world without MSPs would remove that ability to have strategic internal IT and couple that with external MSP. In many cases, small and medium businesses do not even have an internal IT person to speak of and have no choice but to utilize an MSP.

Centralization of IT Talent and Tools

A world without MSPs would see IT management costs skyrocket as organizations struggled to aggregate both people and tools into a centralized IT department. As technology continues to evolve, threats to IT also change. If there is a constant in IT, it is that we will always be changing.

MSPs have a unique business role to play in the modern world precisely because they can collect a group of experienced IT staff who have access to tools most organizations would not have. Working in a group setting, as MSPs do, provides those individuals with collective wisdom and experience more valuable than we realize.

So, the next time you struggle to understand the value your MSP organization has; or perhaps you face a customer who doubts if it is worth it to outsource, consider these ideas and imagine what a world without MSPs would be like.